Thinking and Talking about Arts and Culture in Southeast Asia
Articles
January 4, 2018

Over the last five years, Eko Supriyanto, widely considered the best choreographer in Indonesia at the moment, has attracted both domestic and international attention. His choreographic work involves deep research in places with different habits and cultures. Jailolo, an area in West Halmahera, North Maluku, Indonesia has, since 2012, become such a place for Eko in exploring the richness of his body – and of Indonesian dance.

His two previous works in Trilogy of Dancing Jailolo: Cry Jailolo (2013) and Bala-Bala (2016) were dancing pieces based on the accumulation of experience and the body’s repertory in the Jailolo community. Eko has immersed himself, living in the community and conducting Practice Art Research, which I connect to an ethnographic method. These works were inspired by the local dances Legu Sagai, Soya-Soya and Cakalele, as well as the condition of the surrounding community. In order to not separate the dance from its roots and to present Jailolo accurately, Eko asked local youngsters to be the dancers in these two works.

This work was presented on Sunday (Nov 12) in Salihara Community, Jakarta, Indonesia. Salt was first performed in Asia, after having been presented at DeSingel Internationale Kunstcampus, Antwerp, Belgium for its World Premiere (Oct 14), Kaaitheatre Brussel, Belgium (Oct 19), and Dance House, Melbourne, Australia (Nov 4).

Eko Supriyanto—also known as Eko Pece—presents his twisting, dancing body in the 60-minute performance. It is different from the previous two works in that Eko performs solo. This is significant, because the only one who understands the history of Eko’s body is Eko himself. In terms of form, this work can be considered the autobiography of Eko Supriyanto.

Why is it important to know the history of Eko Supriyanto’s body? Because all dancers undergo a variety of physical disciplines when learning a dance. The repertory of the dancing body automatically stays and grows in the body of the dancer. Salt can therefore be viewed as the means to understanding the negotiation of construction within a choreographer’s body and his body of work. The accumulation of movement experience and the variety of choices in a certain dance becomes embodied in a choreographer.

Eko presented Salt in line with the journey of his dance biography. Eko learned Javanese dance first, which is a classical dance. He then learned Jathilan, a folk dance. Finally, Salt also includes Eko’s experience with Jailolo dances from North Makalu. As a result, Salt shows Eko’s body repertory on those three dances sequentially.

Eko begins the performance by approaching the audience slowly. Standing behind the dim light, he chooses bareness as the initial phase of his body. He starts to move slowly, giving an impression of a neutral body. Afterwards, with dimmer lighting, he disappears into the darkness.

Not too long after, Eko returns with a white cloth with some of its transparent surfaces covering his legs. In the dim light, Eko, who stands in the middle of the stage, starts to demonstrate his movement repertory of classical dance. This is the meeting phase of Eko’s body and Javanese classical dance. 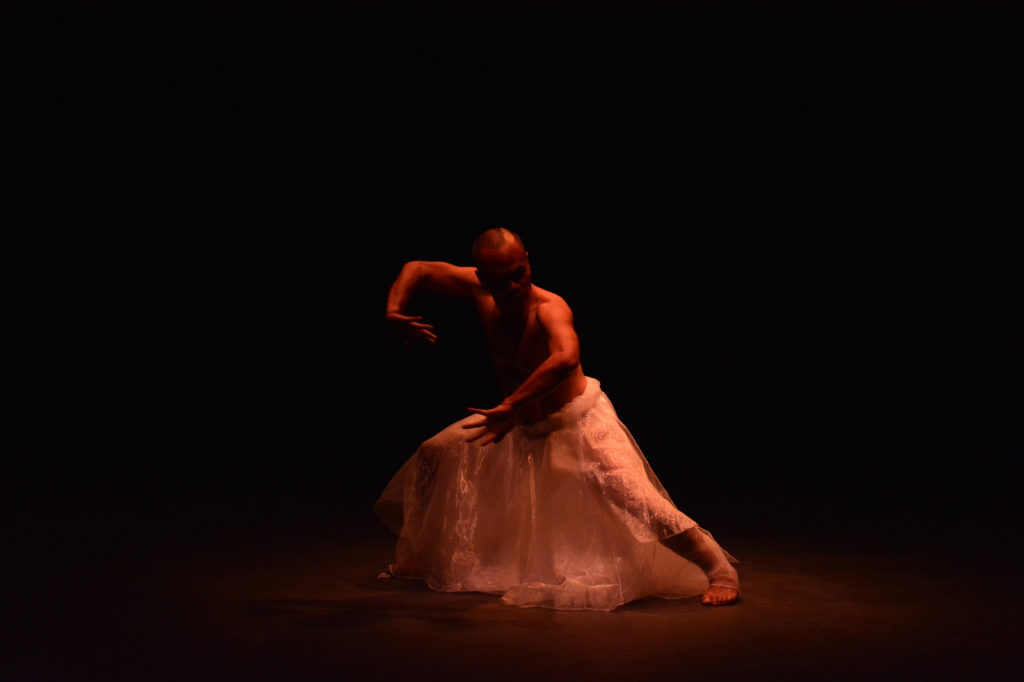 In the next phase, Eko presents the movement repertory of Jathilan, even with the trance point. The contrasting movement repertories between the two dances are deeply palpable. While classical dance presents the exploration of hands with foot easel firmly side by side, the movement of Jathilan is stronger, including stomping as well as jumping. The dichotomy is intensified through the differences in sound. The music of classic dance is dominated by the sound of the gamelan, while Jathilan is dominated by the ‘krincing’/clatter sound created by the Jathilan dancer’s feet. Moreover, Eko makes use of powder that creates a fog every time he takes a step. 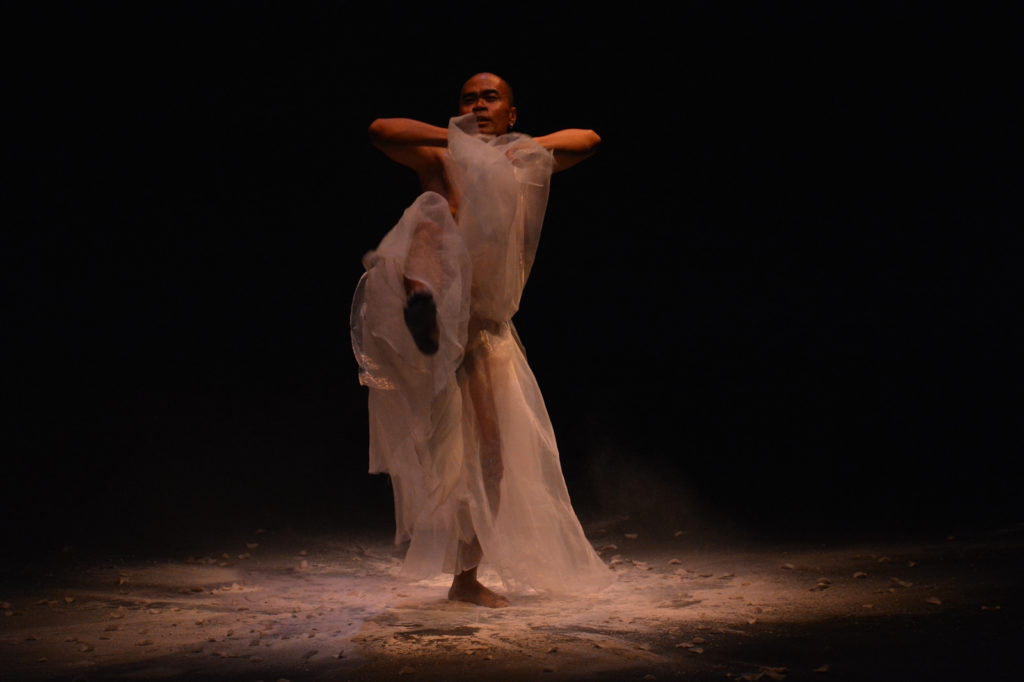 After this exploration of the classical dance movement repertory side by side with Jathilan dance, Eko leaves the stage with less black cloth. This is the phase where Eko meets Jailolo culture. As soon as a galloping sound could be heard, Eko begins to stomp his feet and swing his arms more freely and separately.

He also showed some movement repertory similar to that of a war dance, as the Jailolo dance is more dominated by war and celebration dances. Moreover, the arm movements – stretching and spinning – also dominated the movement in this phase. If the audience had experienced the other two repertoires from the Trilogy of Dancing Jailolo, then some movements presented by Eko would be familiar to them. 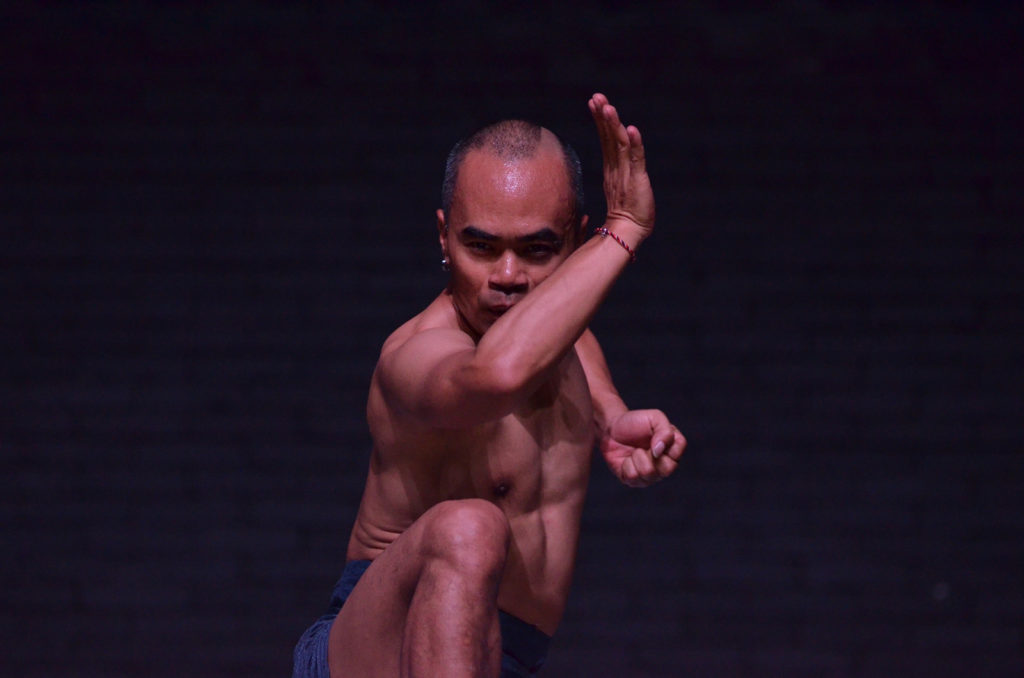 Compared to the two previous dances, the difference is not only in the characteristics of movement, but it is also in the movement and floor patterns that have been created. The impression in this last phase leads Eko to a singular freedom on the body of his contemporary dance. The body that experienced the meeting with this connected construction is out of his habit. The strange body with connected construction in a different landscape, moving from agriculture to aquaculture. At the end of the performance, Eko walks behind the stage slowly as the lights begin to dim, and this is a sign that his body has started the journey again.

The Seen and Unseen

This selection of separated forms also helps the audience to understand the performance more easily. This separation is, in particular, a reflection of the consciousness of Eko’s body and its varied constructions, as well as its meeting of cultures and different ecologies. For example, classical dance and Jathilan dance—both Javanese dances—represent agricultural landscapes, while Jailolo dance represents a more maritime landscape. It can be absorbed only through the body.

The body becomes the space of dialogue and negotiation among the constructions of culture that are received by an individual. In this case, the body is the main medium in channelling this cross-cultural dialogue. It is the one that is embodied by Eko in his work, which not only demonstrates the trajectory and selfhood of Eko’s choreography career, but also becomes a critical consciousness of the dancer’s body with the varied cultures and disciplines it has received. The critical power of choreography is the main matter in creating contemporary dance.

This work has, at least, answered the question about the biography of a choreographer’s dancing body. Eko skilfully disentangles his body construction and culture negotiation in his movement repertory. It is also interesting to see how Eko’s movement repertory has been mixed.

This review is based on the performance on the 12th November 2017 at Salihara Community, Jakarta, Indonesia. Read this review in Bahasa Indonesia.

Michael HB Raditya is a researcher, critic, writer who lives in Yogyakarta, Indonesia. He graduated from Universitas Gadjah Mada, Indonesia, with a major Anthropology (Bachelor), and Performing Arts and Visual Arts Studies (Master) and is an editor for Journal Kajian Seni and many Indonesian books—i.e. Life for Dance (2016); The Power of Art (2017); etc.