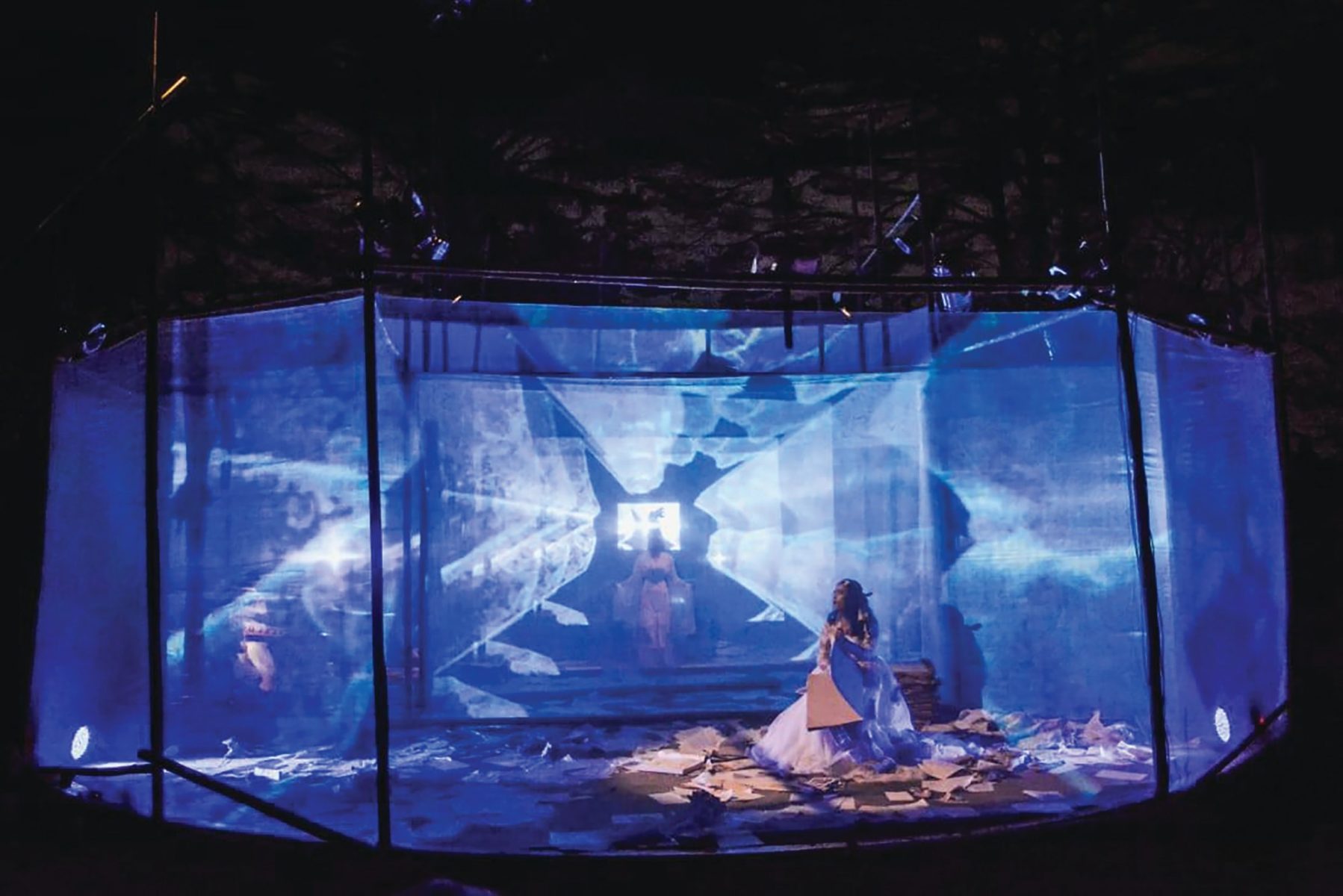 In Hades Fading, Eurydice has a memory problem. She can’t remember where she comes from. The books all tell her something different – her mother was a water nymph, no, a wind nymph or was it a forest nymph? This Eurydice is the same one as per the Ancient Greek myth, just a little more… forgetful. Another woman appears, wailing. It turns out to be Persephone, and together they work out (“I’ve just had a memory…”) that the source of their amnesia is people forgetting about Hades.

Presented at Asia TOPA, this collaboration between Indonesian theatre company Mainteater and Australian collaborators including producer Kath Papas and multilingual consultant Jodee Mundy is a thinly veiled warning about man’s disconnect with the physical world. Perhaps to underscore this, set designers Emily Barrie and Deden Bulqini obscure our vision of the stage with literal layers of gossamer. In an early scene, a chorus of faceless voices appear to come from an army of people, but when Aji Sangiaji’s light filters through, we realise there are only six people onstage. From this small but mighty team, we also get a rich soundscape, supported by singing and the live playing of instruments such as the guzheng, berimbau and Chinese flute.

Written by Sandra Fiona Long, the plot is an iteration of Orpheus’ epic journey to save Eurydice from Hades after she is fatally wounded by a snakebite. In Hades Fading, the music-loving Orpheus is portrayed as a showboating egoist (Wawan Sofwan), most obviously when he breaks the fourth wall, coming out into the audience to share his plans to turn a cave into a recording studio and stadium. This scene sticks out for its tonal shift – while perhaps intentional, it doesn’t quite sit in the same realm as the rest of the play.

Yet, the play has wonderful humorous turns, best expressed in moments when the wide-eyed Heliana Sinaga as Eurydice casually conjures up a laptop out of thin air or retrieves an “archived comment thread”. There is much to delight in the contemporary movement vocabulary of the actors too. In one scene, when Orpheus is asking Hades (Godi Suwarna) and Persephone (Rinrin Candraresmi) for permission to bring Eurydice back to earth, Persephone snubs him with auntie-level precision, repeatedly straightening a newspaper which is obscuring her face.

In the oft-repeated line “which language am I speaking?”, the creators appear to be making a subtle point about decoloniality, which is interesting given that the story is an intercultural translation of a well-known Greek tragedy. This is also supported by the choice of music instruments, which reflect the ethnic backgrounds of its various players.

Credit goes to music director Ria Soemardjo for cleverly employing the musicality of words in Hades Fading, an extension of the motif of the library. There is a memorable refrain of “buku…buku…buku” (“buku” is Bahasa for books) sung by the performers, which is both charming and quaint, inspiring visions of birds singing in a forest. There is also the deliberate choice of having the performers alternately use Bahasa Indonesia and English, with surtitles creatively animated and projected on the screens, and later beautifully expressed through song ­– which I later learn is a signature of Mainteater.

There is no doubt that the creators of Hades Fading are highly imaginative. While it doesn’t always nail the balance between being irreverent and being obvious, I applaud the team for succeeding in summoning up the cosmos, presenting a larger-than-life, magical world while reminding us of the dangers of forgetting our physical one. It is also worth highlighting that the costumes, also by Barrie, appear to be made of scrap materials such as newspapers and leftover cloth, proving that these creatives are not merely paying lip service to the social message they are trotting out.

More importantly, the collaborators, some of whom have worked together for more than two decades, are well-matched, with an obvious sense of mutual respect permeating throughout the entire production. The care is shown in little touches too, such as when presenter La Mama Theatre served battered tempeh with sambal during the show’s gala night. There is no sense of where one ends and one begins, bringing home the message that we live in the same world; so too should we care deeply for its continued survival.

This review is based on the performance of Hades Fading (Hades Memudar) on 27 February 2020 at La Mama Theatre. It runs until Sunday, 1 March 2020. Click here for more information and tickets.