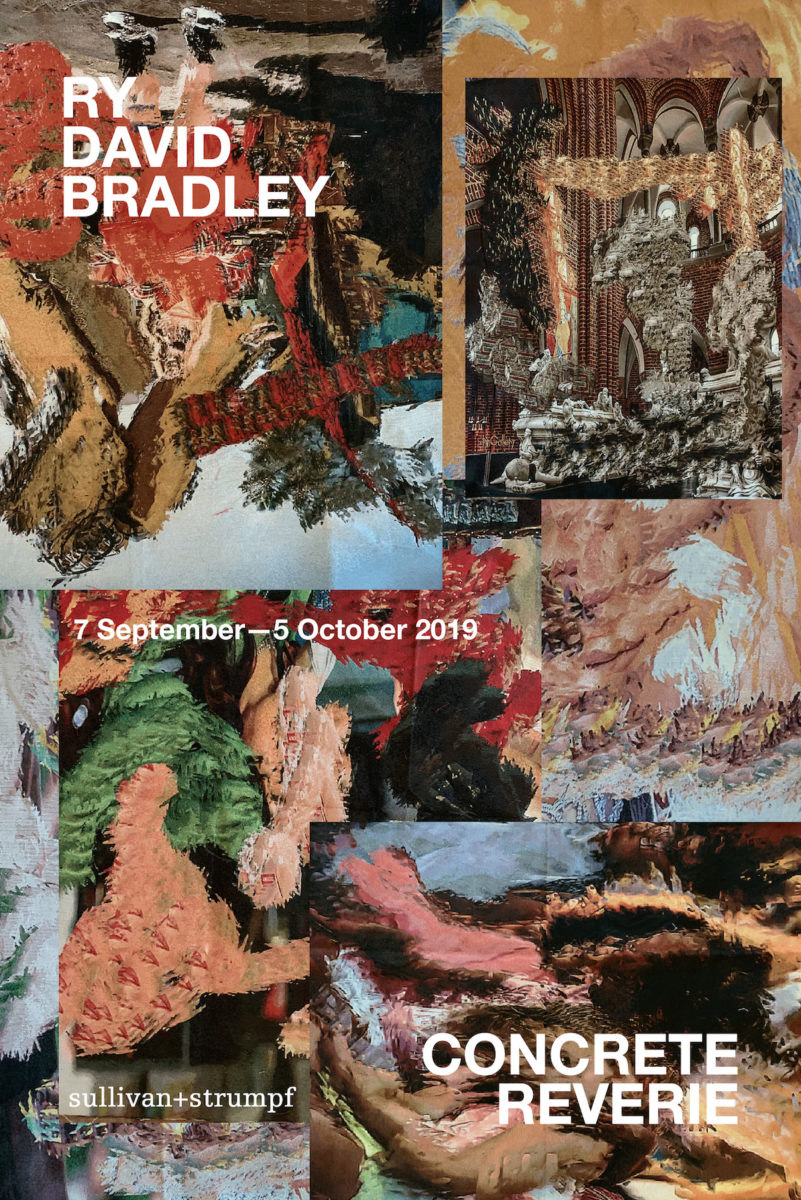 Ry David Bradley continues a longstanding investigation of the 21st century painting. High contrast renders are achieved through a process of heating dyes onto the textured surface of tapestry, adding a layer of spray paint cast over the digital source. Rich hues often unobtainable by anything but the chromatic intensity of a screen, or of paint itself, sit alongside both of these in a process Bradley has slowly developed over many years of investigation. In today’s screen-centric world, a conflation between the private and global occurs. Bradley’s pressing concern is how stories from the digital generation will be passed down through time. He intends for the work ‘To serve as a lasting screen memory of life in 2018’. Bradley studied New Media Video and Internet Art in the early 2000s, believing it was the medium of his generation. Due to concerns about its longevity and accessibility, he shifted his focus to painting as a medium that does not require power or software and will not become outdated or inaccessible through upgrades.

In this body of work for Concrete Reverie, Bradley takes images from the daily news and manipulates them digitally using custom brushes made in Photoshop. The resulting image is then interpreted by a 100-year-old industrial mechanical loom which renders the works using only red green and blue threads, almost like a woven screen or monitor. Creating groundwork for the first computer algorithms, weaving patterns and card computing use mathematics as a base to create structured surfaces create a woven or a digital image. Like an average colour pixel zone, each weave is made from a different thread of colour and depth of the line, which dictates the perceived colour at a distance. Smartphone screens still work on this principle.

Bradley received his MFA from Victorian College of the Arts, University of Melbourne. Since then he has exhibited widely both at galleries and museum in his native Australia, as well as in exhibitions and fairs in New York, London, Milan, Los Angeles, Berlin, Paris, and Palm Beach. Bradley is represented by Tristan Koenig in Australia, Bill Brady Gallery in Kansas City and Miami, and Brand New Gallery in Milan. His work is in the collection of the National Gallery of Victoria, Herning Museum of Contemporary Art, Lyon House Museum, and numerous private collections around the world.