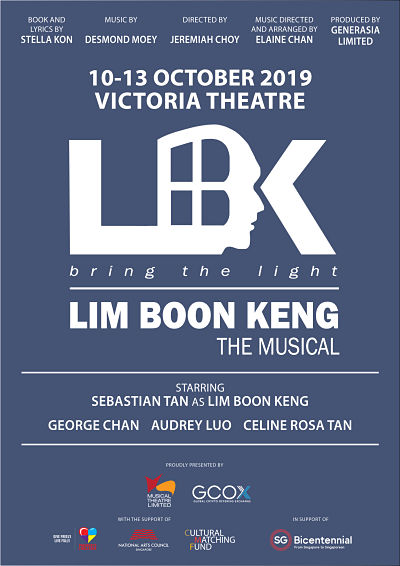 In commemoration of Singapore’s bicentennial this year, Musical Theatre Limited presents the first-ever musical about Dr Lim Boon Keng, a prominent public figure in Singapore during the Colonial period.

Script and lyrics are by Stella Kon, an established playwright whose best-known work is the monodrama, Emily of Emerald Hill, and who is the great-grand-daughter of Dr Lim Boon Keng.  She has drawn on family memories, as well as the historical record, to honour his legacy. Music is by show producer and songwriter, Desmond Moey, whose recent works include Emily The Musical 2016 and My LOVE is Blind 2016.

Jeremiah Choy, a recipient of the Best Supporting Actor for Life Awards this year and with over 20 years of theatre experience as director and actor, will be the Director of the musical.

“In a century torn by war,

Dr Lim Boon Keng is a prominent Singaporean historical figure responsible for helping to shape Singapore’s history whom many may know as the namesake of Boon Keng MRT Station. The first Chinese boy to receive a Queen’s Scholarship, he returned to Singapore in 1892 with a first-class honour in medicine.  He founded schools, championed education for girls, rallied public support on many public causes of his day. For all his good work, he was awarded the Order of the British Empire, and yet he was accused of being a spy and collaborator of the Japanese during the Second World War.

Lim Boon Keng, The Musical, traces the ups and downs of a man full of ideas and ideals, as he reflects on his life and his philosophy in the early 20th Century Singapore, and reveals his deeds and contributions through Singapore’s colonial times, the second world war and its aftermath.

Starring alongside Sebastian are Choreographer George Chan – who has performed in over 2,000 shows in both the Singapore and European Arts scene, Audrey Luo – who has independently co-produced and acted in her first Mandarin monologue My Mother’s Chest to full houses and Celine Rosa Tan – whose local works include Fraulein Kost in Cabaret, Yehanara in The Forbidden City, and Georgie in The Full Monty.

Elaine Chan will be directing and arranging the music for the Musical. In this year alone, she has composed the soundtrack and songs to Cake Theatre’s 25-minute musicalette – Makan Dreaming, a dramatic presentation on Street Hawker History (as part of the Singapore Heritage Festival in March 2019), composed the soundtrack to DramaBox Theatre’s Both Sides Now, as well as music direct Broadway Beng.

Playing at Victoria Theatre from 10 to 13 October 2019, tickets are available for sale on Sistic.