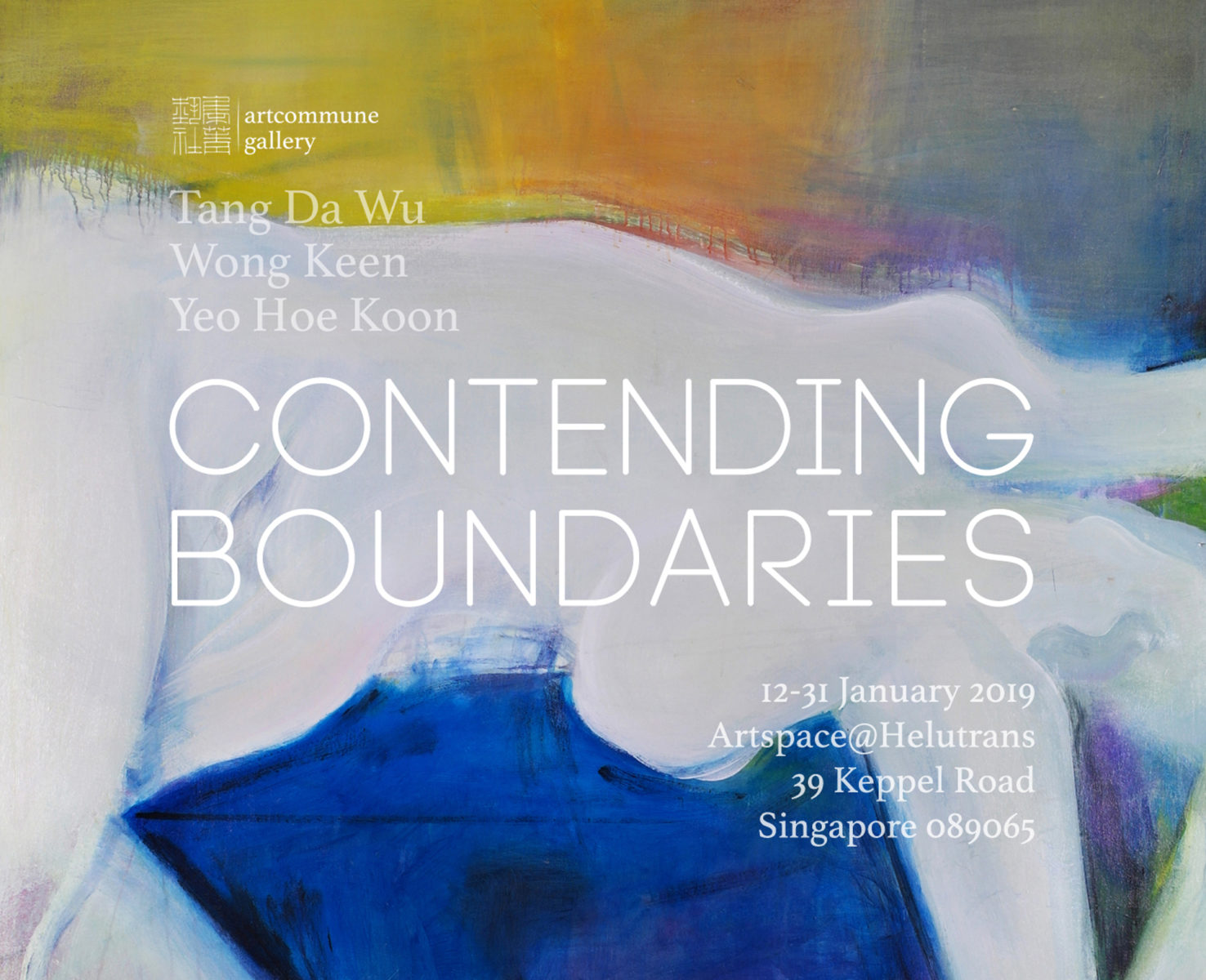 In conjunction with the Singapore Art Week, artcommune is pleased to present Contending Boundaries, a showcase of over 60 works by Singapore artists Tang Da Wu, Wong Keen and Yeo Hoe Koon. Featuring works from the 1960s to 2018, the exhibition explores the artistic environment and values that informed each artist’s identity and quest for self-expression during their art education abroad between the 1960s and 1970s, and how their respective experiences continue to impact their current practices. The exhibition is on view at Artspace@Helutrans from 12 to 31 January 2019.

Contending Boundaries will include an introductory talk on the dynamic visual language of Wong Keen by Ms. Ma Peiyi, who is curator for the exhibition. Titled ‘Singapore Artist Series: Wong Keen‘, the talk will be held on Sunday, 13 January 2019, 4.30pm to 6pm at Artspace@Helutrans. Please note that attendance for the talk is chargeable at $25 per person. To register for the talk, please email us at: valerie@artcommune.com.sg

Tang Da Wu (b.1943) was educated in a Chinese-medium school and picked up ink and brush painting at a young age through his father, who painted in the medium. From 1970-79, Da Wu studied sculpture in the UK — first at the School of Fine Art, Birmingham Polytechnic (1970-74) and later St. Martin’s School of Art, London (1974-75) — and increasingly found his purpose in installation and performance/activist art. He has continued to paint over the years and his ink work often demonstrates concepts relating to traditions and mythologies.

Wong Keen (b. 1942) grew up in a Chinese literati environment and as a child studied drawing and painting under pioneer artists Liu Kang and Chen Wen Hsi. At 19, he left Singapore to study at the Art Students League of New York (1961-65) and later spent a year on scholarship at the St. Martin’s School of Art, London (1965-66). The plethora of influences Wong Keen encountered in the fast-paced New York art scene encouraged him to delve into different styles and mediums. His oeuvre, which encompasses canvas, paper, mixed-media and installation work since the 1960s to the present, is a powerful embodiment of the elegant expressivity of Chinese ink wash aesthetics and Western inventive approach towards form and colour.

Yeo Hoe Koon (b. 1935) studied at the Nanyang Academy of Fine Arts (1955-57) and later travelled to Paris where he spent three years at the École Nationale Supérieure des Beaux-Arts (1959-61). Between 1965-68, he also undertook a study tour around Europe where he continued to immerse in some of the world’s most flourished art scenes. Hoe Koon paints in Western oil, acrylic and Chinese ink and his body of work is largely characterised by his pursuit of the lyrical abstract language.