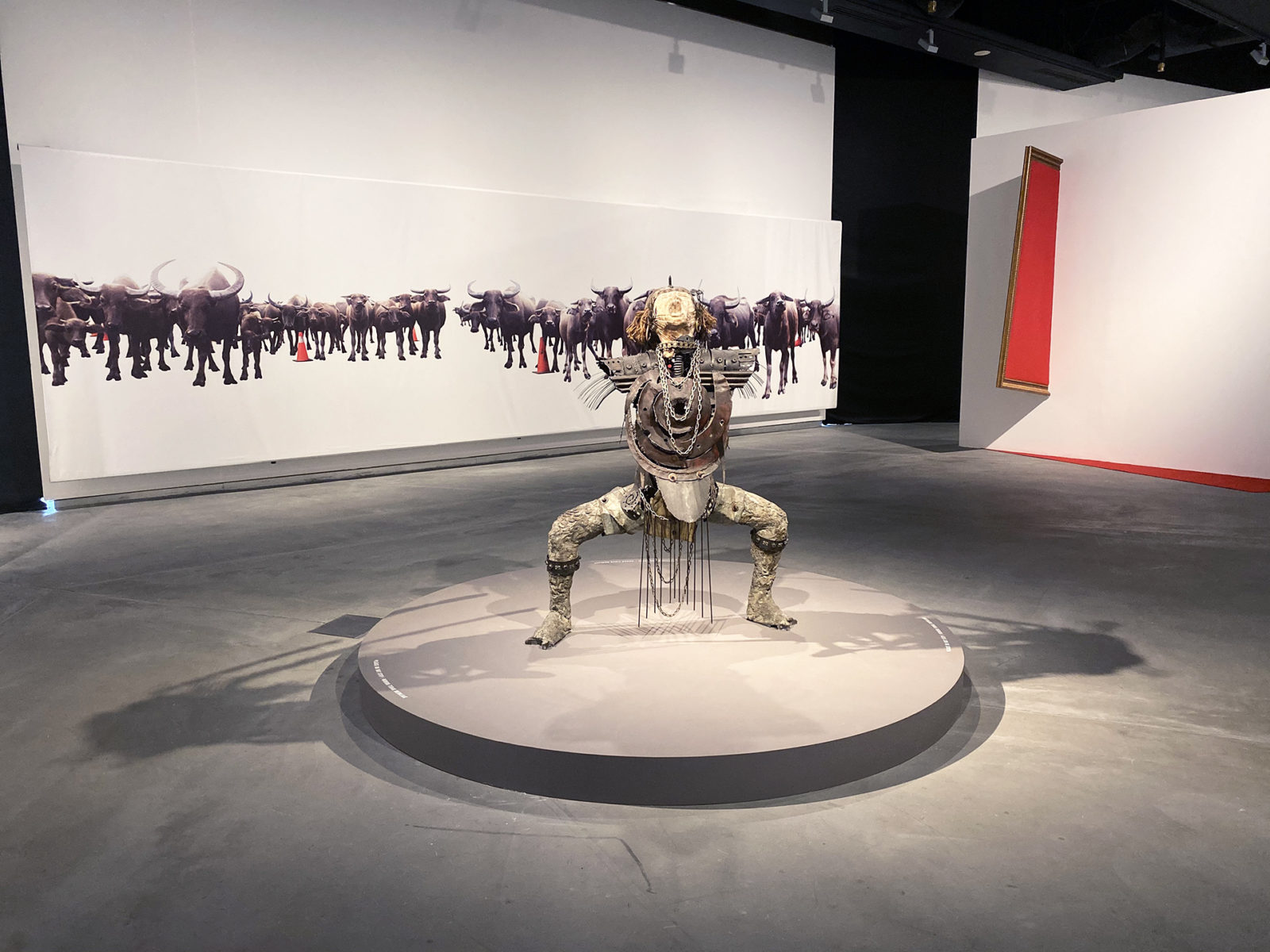 “You’re a guest, you’re a guest, you’re a guest.” This anodyne version of the Beauty and The Beast song played in my head as I walked through the exhibition The Body Politic and the Body, currently on at ILHAM Gallery in Kuala Lumpur. For a show referencing the corporeal, it put me in two minds, and for good reason. The presentation of works by Malaysian artists is a collaboration between the Singapore Art Museum (SAM) and the privately funded public arts space ILHAM Gallery. This means that in a wholly Malaysian show, seven of the 12 works are from a Singaporean permanent collection. Of course, having been curated jointly by both sides, the show is essentially a product of bilateral relations.

What struck me the most was how right it felt to see works like Lang Kacang by Bayu Utomo Radjikin and Redza Piyadasa’s May 13, 1969 in a Malaysian institution. I’d seen Piyadasa’s work just a few months ago in the Southeast Asian galleries of National Gallery Singapore, but within the confines of a relatively smaller space, the coffin-shaped work referencing Malaysia’s deadly race riots instantly becomes more claustrophobic. In the context of a Malaysia Baru whose sheen is increasingly wearing off, the construction and reconstruction of May 13, 1969 (the artist burned the original in 1971 as if in mourning, and the piece was reconstructed in 2006) takes on new meaning.

Younger Malaysian audiences would not have seen some of these works at all, despite them being written about in books and studied extensively in schools. A quick Google search for Lang Kacang turns up scores of blog posts of students’ analyses of the iconic 1991 work, accompanied by images credited to sources like Pinterest. But this life-sized construction of a Sarawakian Orang Ulu warrior made of industrial scrap material, armless with his face contorted in a silent scream, deserves to be seen in person. Not only is the fight for indigenous rights in the face of industrialisation still an ongoing concern, but as one of the oldest works in the exhibition, it grounds the entire show in the close tying of politics with the body, or the self.

What really works for the exhibition, more than the strength of its individual works, is having them in conversation with one another. Lang Kacang is flanked by Yee I-Lann’s almost 10 metre-long Kerbau, a tribute to the water buffalo made after the first Bersih rallies, where 30,000 marched for fair elections in Malaysia. It manages to imbue the usually docile, agrarian animal with the spirit of grit, perseverance and the triumph of everyman over authority. Placed next to each other, the warrior’s anger and the buffalo’s defiance collectively become galvanising for the viewer.

A similar sense of pride can be found in chi too’s Bukan Budaya Kita series, with road markings of key sites of civil disobedience rendered large on canvas. May 1969, Reformasi, Bersih 2.0: chapters of Malaysia’s history bookmarked, writ large and put on display. Civil disobedience as “bukan budaya kita” or “not our culture”, as a Malaysian politician once put it, reminds me of a similar hot take on our side of the Causeway – that brown face is not Singaporean. As cleverly implied in chi too’s work, such distinctions are meaningless when it comes to matters of human rights and decency.

Adding colour to the proceedings is the quietly political HOL (Higher Order Love) Chapter by Hasanul Isyraf Idris. His presentation of 40 surreal, science fiction-inspired drawings reference his parents’ time on Pulau Pangkor, specifically his late mother’s post-traumatic dreams relating to racial violence she witnessed on the island in 1959. At the other end of the gallery, Ahmad Fuad Osman inserts a bearded hippie (actually an old classmate of the artist) into historic photographs in Recollections of Long Lost Memories, an incursion that is both playfully satirical and a commentary on the unreliability (and abuse) of history. For the senior artist, whose survey show is currently on at KL’s National Art Gallery, the work is a way to get people who don’t like to read history books to revisit past events and episodes.

But some things transcend borders. Even when we do not understand all the esoteric references – and here a good caption, curator or guide can help fill in the gaps – there are multiple entry points to a work. Nadiah Bamadhaj’s Quiet Rooms is a reference to the experience of a married woman whose womb is policed by the people around her. It is one of the only works in The Body Politic and the Body that really deals with the biological body, and the politics of the feminine body at that.

Wong Hoy Cheong’s stunning Tapestry of Justice comprises six years’ worth of thumbprints collected in opposition of the Internal Security Act in Malaysia. It reminds me of Suzann Victor’s 2015 artwork Bloodline of Peace, an act of mass blood-letting that was shown in SAM in 2015. This is mainly due to aesthetic similarity – both large undulating forms, and it is worth noting that SAM’s curatorial co-head Tan Siuli is/was involved in both exhibitions – but this echoing also suggests that our regional connections are stronger than we think. More importantly, wielded in the right way, our collective bodies possess transcendental power.

Some of my initial discomfort with this exhibition probably lies in how museums all around the world are grappling with calls to repatriate works of art to their rightful countries (it was even referenced in Black Panther). Of course, that is more of a colonialism issue, while the artworks from this exhibition were acquired on the open market, but my positionality is rooted in how some institutions, like the British Museum, prefer to loan such items to their home countries instead of returning them – a presumption of their superiority of care.

I wonder what conditions would be necessary for important Malaysian artworks to be in the care of a Malaysian institution, but I recognise that this is a larger, more problematic question that isn’t really an indictment directed at either ILHAM or SAM. On the contrary, while structural challenges exist and will probably continue to exist, cross-border collaborations like The Body Politic and the Body that can bypass them should be encouraged. When it comes to museum collections, audience education and awareness, especially on issues of a nation’s history, is important work, and we should not let other things – politics, incompetence, or temporary inconvenience – stop them so easily.

Perhaps then my discomfort is more due to the fact that, despite my close intimacies with the country as a Singaporean, I am viewing these works as an outsider. My cognitive dissonance only starts to clear once I watch the artists themselves walk through the exhibition, looking at works with a sense of familial familiarity. With four of the works in the exhibition coming from the artists’ own collections, and the addition of one new commission by Swedish-based artist Chia Chuyia, it is not so much a question of provenance as it is about a larger Malaysian spirit. Which is why seeing The Body Politic and the Body feels like watching a complex jigsaw puzzle finally being completed.

That SAM is currently under renovation seems to be part of the overall equation. The building on Bras Basah Road is currently boarded up for a major revamp that will only be completed in 2021, and museum staff have been working hard to organise satellite shows which will allow it to continue its mission of promoting Southeast Asian contemporary art. (Disclaimer: I used to work there from 2011-2014.) Singapore has always positioned itself as a hub for the Southeast Asian art scene, but in a way that seems more about staking claim than it is about sharing resources or decentralising power away from itself.

In this context, organising this show with ILHAM seems to me like one of the best things SAM can do and should do more of. It embodies a spirit of “tumpang sekaki” – borrowing space in a way that implies kinship and easy reciprocity between two parties. For a while, at least, it makes me believe in the promise of an interconnected Southeast Asia that is often conjured up and imagined but rarely achieved. In this magical realm, barriers disappear and all is right in the world. The real question is what happens at the end of this temporary tumpang of happiness.

The Body Politic and the Body, an ILHAM x SAM project, runs till 12 April 2020 at ILHAM Gallery in Kuala Lumpur. There will also be a symposium, “Main Rupa dan Tubuhnya: Bodily Forms of Play Contemporary Visualities in Malaysia | Budaya Visual Semasa Malaysia”, from 22 to 23 February 2020. More info here.

Nabilah Said is the editor of ArtsEquator. She would like to thank the Singapore Art Museum for supporting her stay in Malaysia while she visited the exhibition.